How the Government Could Save the Restaurant Industry

The restaurant industry is vital to the health of the Province of British Columbia (BC). Vancouver is the jewel of BC and is known for its world-class restaurant culture. 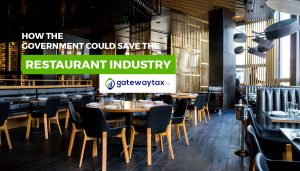 The COVID-19 pandemic has reminded us how important this industry is. Many of the restaurant owners who have closed their restaurants may never open again. For those that do re-open, how will people react to the new dining experience with its Plexiglas dividers and personal protective equipment?

Restaurant owners will be the first to tell you it is difficult to make money in their industry.

Why is There GST on Restaurant Meals Anyway?

Did you know that food never had sales tax apply to it prior to implementation of the GST? In fact, most “foodstuff” was exempt under the old federal sales tax (FST) rules, and today, most “basic groceries” are zero-rated under Schedule VI of the GST rules.

Back in the day, to sell the GST to the masses, the government promised that food would remain free from sales tax. What they did not disclose when selling us on GST was that, for the first time, food and beverages sold at eating establishments, or served for immediate consumption, were considered a discretionary choice, and therefore were fully-taxable at 7% (that was the GST rate back then).

When you look at the GST legislation, the rules are archaic as the following examples illustrate:

The restaurant industry is caught in a terrible dilemma. Because they acquire their inputs (food & labour) without having to pay GST, they have very little to claim as input tax credits (other than for large capital expenditures) when they go to report and remit GST.

This means that the proprietor must be very good at acknowledging that they are collecting these funds on behalf of the Receiver General and saving these funds, because when it comes time to file their GST/HST return, they will have to come up with the full 5% of their gross sales (can you imagine 13% in Ontario, and 15% in the Atlantic provinces). Many proprietors fall behind and get pecked to death by penalties and interest for late filing and paying late.

How Much Would Eliminating GST/HST on Restaurant Meals Cost Government?

The cost to the Federal government in lost sales tax revenue would be about $700 million per year, based on Restaurants Canada data. Realistically, in the aftermath of COVID-19, this revenue loss is probably more like $350 million per year now.

Canada-wide, the revenue loss to the Feds would be about $4.2 billion. Annual federal government revenues are $332 billion per year.

Food Should Not Be Subject to Sales Tax

If the Feds were to eliminate the GST on restaurant meals, this would help restaurant operators immensely by removing their responsibility of having to save 5% of their gross sales, collected as tax, to remit to the government. The $4.2B in lost revenue to the federal government, would amount to just 1.3% of total government revenues.

Those provinces that harmonized their sales tax systems with the federal GST enjoyed a huge financial windfall, because for the first time, they could tax food; at least, food that was ready-to-eat or served in an establishment. I’m talking about the Eastern provinces, whose restaurant industries may not be as important to them as ours is to us.

Shouldn’t food be free from sales taxes no matter where or how it is consumed, even if heated for consumption or sold at an establishment?